The Life of the Australian Brushtail Possum

Home The Life of the Australian Brushtail Possum

The seemingly simplistic marsupial of Australian decent derives its name from Greek and Latin origins. The Trichosurus Vulpecula, meaning “Furry Tailed”; or the Phalangista, which translates to “Little Fox”, is more commonly known as the Australian Brushtail Possum. This animal of the Phalangeridae family has the honor of being the second largest of its kind. The majority of this species is found outside of its native land. This possum has cuddly features, yet there is much more to this curious tree-dweller than may first meet the eye. 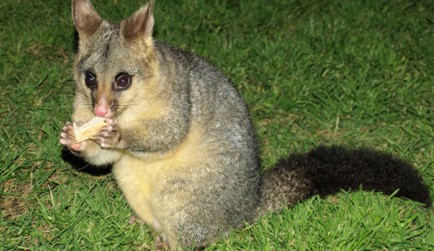 The Australian Brushtail Possum is a beautiful mammal with large pointed ears, a bushy tail, and strong feet which have adapted to grasping branches. The possum has sharp claws on the forefeet and the first toe on each hind foot. Its third and fourth toes are connected by skin and it is with these two toes that they groom themselves. On average they grow to a length of 32-58cm head to body & 24-40cm for the tail. The estimated weight of the possum is 4.5kg. Males tend to be larger than females & they usually have a reddish tone around their shoulder region. The female has a pouch which opens at the front. Both have a scent gland that emits a reddish secretion that stains the surrounding fur on their chest. This species is found in various colorings such as brown, silver-grey, black, and golden. The possum as very unique vocals and communicates emotion, warning, mating, and defense through hissing, grunting, screeching, guttural coughs, alarm chatters, and even clicks.

Interestingly enough, the female Australian Brushtail Possum tends to have a longer lifespan than that of the male of this marsupial. This is due to females staying closer to the more secure habitat of their mother even after they birth their own young. Males are more inclined to venture out to seek new nesting grounds. Breeding season peaks right around springtime, from September to November. In some areas they are more inclined to mate during the autumn months of March to May, however, it is possible for possums to breed in whatever part of the year that they deem to be worthy. When the possum is ready for mating the female is around one-year old and the male is not prepared until he is fully two-years old. When a male finds a desired female he may need to go through a one-month process of courting before he is allowed to follow through with the privilege of mating with her. Once the female conceives, she goes through a 16-18 day gestation period and gives birth to a single offspring. The 2g, 1.5cm long sapling then climbs to her pouch is search of its first nutrition and remains there for the next four to five months as its overall development continues. The young one will then migrate to riding on the back of its mother for the following three to four months. A common finding among the species is an increase of males being born when there is a significant lack in cave availability and, on the contrary, an increase of birthed females in areas containing plenty of caves. 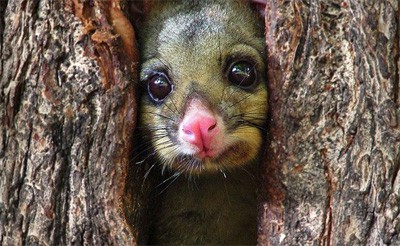 The Australian Brushtail Possums are commonly found in the north and south west corners of Australia, as well as, the entire east coast, and all over the land of New Zealand. Mostly, the possum is spotted in forests, treeless areas, semiarid areas, even in the city, in fruit trees, vegetable gardens, and sometimes even caught raiding kitchens. They primarily reside in hallows of trees, caves, roofs of houses. Dens and caves are more often the primary choice of real-estate for the possums who reside in New Zealand than those who dwell in their original Aussie territory. It is common for mother and daughter to have spats over the den or cave which one of two currently occupy. More often than not the daughter is the one to be evicted, even by her own mother. Occasionally they share dens, but usually a solitary lifestyle is preferred by this marsupial. In order to keep others at a distance the possum exerts scent markings from their red-tinted scent glands located on the chest, or by urine, or vocal calls.

Very adaptable to multiple vegetation types, besides its preference of eucalyptus the possum also chooses the occasional flower, shoot, fruit, and from a variety of seeds. In being a semi-arboreal species, this marsupial also enjoys small animals as an alternative to its typical vegetarian diet. The selection of small animals the possum prefers is very particular to insects, birds’ eggs, chicks, along with other breeds with small vertebrates. Despite the eucalyptus leaf being a favorite of the possum, its teeth are incapable of fully grinding it to pieces. Since the eucalyptus is not easily digested by the possum, nor does it provide sufficient amounts of nitrogen, they must seek other nutritional sources. This leaves fruit and herbs to be a more ideal food to consume for this marsupial through which the remaining vitamins and minerals will be provided. Unlike its cousin marsupials, the Koala and the Great Glider, who have a singular focus during a foraging excursion, the Australian Brushtail Possum may consume three to four different plant types in one outing.

There are times when the possum fights another possum, or other animals, for territory which becomes a contributor to their unfortunate mortality. The possums that inhabit New Zealand are fortunate enough to only have cats and humans as personal predators. However, those that reside in Australia are threatened by tiger quolls, dogs, humans, cats, goannas, powerful owls, and carpet snakes. Possums are not usually aggressive to one another, but simply stare at one another with ears erect. When the time comes that they do need to protect themselves their front main claws will be used, as well as, the strong grip of their paws.

A current major threat to the population of the Australian Brushtail Possum is the ongoing and thriving business of the fur trade industry in New Zealand. Their fur, hide, and tails all become high-end products for customers worldwide. The fur trade is the primary reason the possum was brought over from Australia to New Zealand in the 1850’s. It wasn’t long before their population exploded and caught the people by surprise. To this day there are continued efforts and debate as to how to balance care for this marsupial and protection of native species of animals and plants alike.

The common saying, ‘Don’t judge a book by its cover’ could be applied to many aspects that the Australian Brushtail Possum holds. There are multiple curious habits the possum possesses, such as mothers and daughters fighting over homes, scents secreting from their chest, and their infants crawling to the safety of the mother’s pouch at a mere two-and-a half weeks old. A few natural rarities that are innately engraved in the fibers of its being include only birthing females when there are plenty of caves to go around, consuming both plants and small animals, and having an extended process of consorting before the mate is accepted. Each of these aspects are reason enough to say this marsupial holds a unique position within the phenomenal animal kingdom.