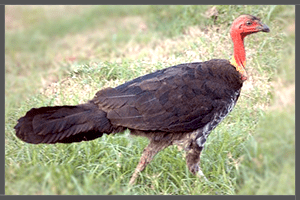 The Australian Brush-turkey, commonly referred to as a scrub turkey or a bush turkey, is a common pest in suburban Australian gardens.

They can be found across a large proportion of Eastern Australia from Far Northern Queensland to several hundred kilometers south of Sydney, New South Wales. These turkeys thrive in rainforest regions but can also be commonly found in drier scrub forests. As Australia’s suburban sprawl encroaches on their habitat, more and more turkeys are invading people’s gardens and vegetable patches. Bush turkeys survive on a diet of seeds, fallen fruit and insects. They can also sometime be found eating fruit still on trees which they are able to access via their limited flying capabilities. Brush turkeys can be a pest because they often damage the ground when scratching up leaves searching for food or while building a nest. They can also cause extensive damage to vegetable and food growing areas when scavenging for a meal.