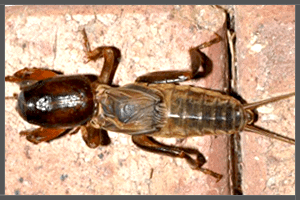 Grasshoppers, locusts, and crickets all belong to a group of insects known as orthopterans which mean ‘straight wings’. Many Australians will be familiar with the sounds of crickets chirping at night, as they call out to other crickets in the vicinity. All crickets are nocturnal. The chirping is usually performed by male crickets in an attempt to attract females and deter competing males from coming too close. While there are over 900 species of crickets globally, none of them are harmful to humans. Crickets are scavengers who feed on organic material, decaying plant material, fungi, and some small plants etc. They are omnivorous and will eat their own dead when there are no other sources of food available. They also exhibit predatorial behavior towards weak or crippled crickets. Crickets are generally considered more of a nuisance than a real pest, so they are not often targeted for extermination.