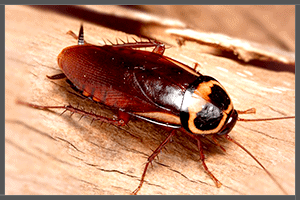 The Australian cockroach is a large species of cockroach that, despite its name, originated in Asia. The species can now be found all throughout the globe due to traveling via ships and the increase of commerce between locations around the world. They thrive in wet, tropical areas, and prefer warmer climates as they are not especially tolerant to the cold. They are able to survive in cooler areas however as long as they remain indoors, sheltered from the harsh climate. Like all cockroaches species, they are scavengers and survive on a wide array of plants and other organic matter. Because Australian roached often eat rotting garbage, they can spread a number of diseases to humans including gastroenteritis and salmonella. Some studies suggest that cockroaches can also cause allergies. A roach infestation can be treated through a combination of insecticide and good hygiene practices.